“Well, we really disagree about this, but I still think you are a cool guy.”

This may be one of the highest compliments I have ever received.

We were studying biochemistry; cells, molecular machines, RNA, etc… It’s one of my favorite science topics and there are an abundance of sub-topics that students can spin off for projects. In one such project I ended up sampling fried crickets as a protein alternative. Good times.

Along with the territory comes reproductive science (another great topic, ask me about the Siyal Lewis X Oligosaccharide! Ask me about contributing to the Wikipedia article!). Hormone signals, genetic recombination, meiosis… all such cool stuff.

And along with that territory conversation sometimes arise around hot topics like abortion and sexual ethics. Well, less serious questions about starfish too, I guess. 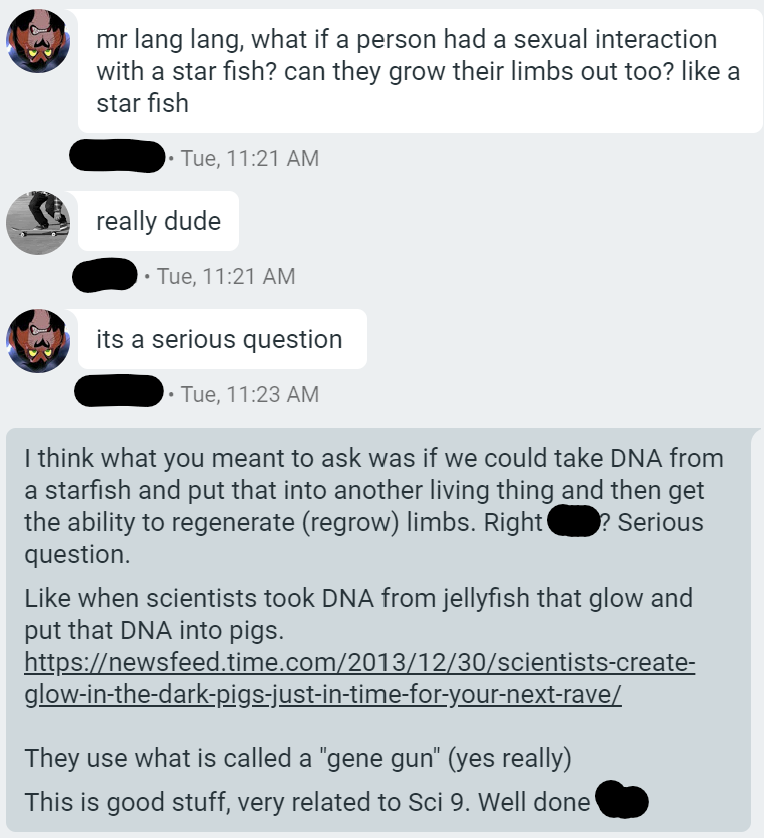 In this context (biochemistry, not the starfish) I was a part of a conversation a few years ago with students. It actually started with a dress code/uniform complaint- particularly against the school’s no leggings policy. Students took exception with leggings in particular because it was a restraint on women but not on men. I normally would avoid such squabbling debates, but decided to sit down and listen. The conversation moved to gender norms, clothing norms, professionalism, cultural acceptance, and justice. Some students were more outspoken, some just listened. I chimed in and would remind students that the uniform policy was “all my idea,” and that “the decision making power for the entire district rests with me.” It was a deep conversation, but kept enough lightness and smiles.

At the end of the day, some of my students and I hold quite contrary understandings on issues of homosexuality and transgenderism. But we didn’t end up as Repugnant Cultural Others (thanks Alan Jacobs!). There was common ground and there were differences. Fist bumps at the end.

Convictions held graciously. Truth (objective as I see it) shared with love. I was honored that these students considered me a cool guy.

at April 30, 2020
Email ThisBlogThis!Share to TwitterShare to FacebookShare to Pinterest